I made a New Years resolution to blog more often and so far that has failed! My job has kept me pretty busy and the end of my pregnancy was rough physically because I was so tired and trying to spend as much time with Rhory before her little brother arrived! Maybe I'll go back and try to blog about events I haven't, but I'll probably just try to go forward from here!


Rhett joined our family on March 22! Josh and I went to the hospital on the night of the 21 at 11 PM to start the induction process. Once I got all checked in and the medicine started it was probably 1:30 AM - yikes! Because I had a c-section with Sawyer and was attempting another VBAC (I had a successful VBAC with Rhory) they can only use pitocin to get things started. The plan was to start pitocin on the lowest dose (2) and up it by 2 every 30 minutes. She checked me and I was still only at 2 cm (the same as my 39 week appointment) The nurse left and said "try to get some rest!" How am I supposed to get rest when she is going to be coming in every 30 minutes?! Around 2:30 my contractions had started being regularly between 2-3 minutes apart. The nurse called Dr. Pohl and he said he would come break my water. I had already requested that the epidural be done first because with both Sawyer and Rhory it took forever to get the epidural AND it only worked on my left side so I wanted time to fix it first if it did the same thing. The epidural was done at about 3:15 AM and Dr. Pohl came in around 3:45 to break my water. He checked me first and I was still only at 2 cm! It was as if the contractions had done nothing! At that point I wasn't feeling any pain and was completely exhausted so both Josh and I decided to take advantage and sleep.

Fast forward to 5 AM. Apparently the contractions on the monitor were picking up to about every 1-2 minutes so the nurse came in to check me. Because of the epidural I did not feel the contractions picking up and was only feeling some pressure. When she checked me I was at 6 cm! Wahoo - finally some progress! I told her that I was feeling pressure with the contractions, but she told me to let her know when it became constant. About 15 minutes later - it was constant. She decided to check me again. At 5:15 AM I was officially 10 cm - literally within 15 minutes I went from 6-10 and ready to push. She called Dr. Pohl and he said he was on his way. She wanted me to do a test push just to make sure baby was close to being ready. Well, I couldn't finish pushing because she said if we didn't wait the baby would be born without Dr. Pohl, and I wanted no part of that! Dr. Pohl finally arrived around 6 AM and got everything set up. They had me push one time - and baby Rhett had made his arrival! This kind of intimidates me for the next baby (later on down the road, of course) because if I go in to labor on my own I could have that baby at home! 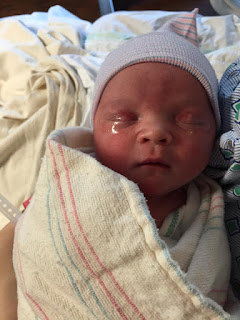 Hopefully this will be the first of many more posts!

Posted by Unknown at 1:08 PM No comments: